Marketing used to be pretty simple. You developed a compelling message, used mass media to broadcast that message to large audiences and grew market share. Mostly, you aimed for the meaty part of the curve, where the law of averages conspired in your favour.

Then came the cable TV era. Audiences fragmented and targeting became the order of the day. Instead of starting with the message, marketers thrived on consumer insight and tried to identify a specific emotional trigger that would win them loyal customers.

Now mass marketing has shifted to mass personalization and messaging and targeting have given way to activation. It is no longer enough to simply grab attention, we have to hold attention. Today’s marketers need to inspire movements in which their customers become their best salespeople. We need to make a fundamental shift in mental models.

The End Of Push

In the days of mass audiences, marketers could treat everyone as if they were the same. Programming was so limited and television audiences were so large—you could easily reach a large chunk of the population with a single ad spot—that the numbers made this a pragmatic approach.

So marketers sought to grab consumers’ attention through glitzy ad campaigns and then “push” them through the sales funnel. 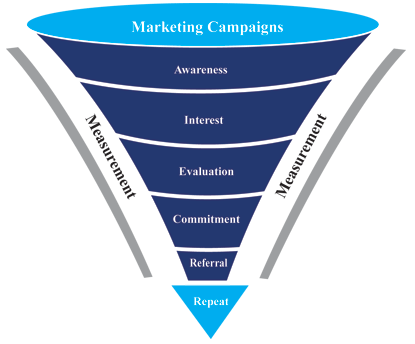 The basic idea was that you would get people’s attention, tell them about your product or service, convince them why it should be their preferred option and then drive them to action. While there were important steps along the way, the thinking was that the more people you put in the top, the more would come out the bottom.

It was a very simple—some would say naive—model, but it worked. In fact, most of the great brands of the 20th century were built that way. Later, when audiences fragmented, tactics changed, but the basic strategy stayed the same. We were still shooting messages at consumers, although with rifle instead of a shotgun.

Now that strategy is broken. Put up an attention grabbing TV campaign today and consumers won’t flock to the stores, but to the Internet. Their activity will leave a data trail, which your competitors will use to retarget your consumers with competing messages before a purchase event can occur.

In effect, the rise of digital marketing technology means that building awareness is no longer a sales driver, but a lead generation service for your competition. So marketers have started to look for another way.

The Problem With Pull

As audiences continued to fragment and digital technology made it increasingly viable for brands to become publishers, many began to think that maybe it was time to turn the funnel on its head. Rather than pushing consumers with awareness, they would pull them through it using inbound strategies, like helpful websites, events and social media strategies.

Yet the cautionary tale of the Pepsi Refresh project shows why this approach has pitfalls as well. For those who are not familiar, in 2010 Pepsi decided to forego its usual Super Bowl ads and spend $20 million on a social campaign in which consumers would vote to give grants to good causes. It was a miserable failure.

A Harvard Business School case study explains what went wrong. Rather than engaging people interested in Pepsi’s product, the campaign connected with those who were interested in social causes. It was a bad match. There was little connection between the initiative and Pepsi’s brand, its previous marketing activity, demographics or positioning.

So rather than showing itself to be an uber-hip marketer, Pepsi became a corporate carpetbagger, trying to buy the love of consumers by doling out bags of money to causes it had no previous involvement with or long-term commitment to. The result: Pepsi actually lost market share and dropped to third in its category for the first time in modern history.

What many marketers fail to realize is that technology has not only changed how consumers behave and the tools we use to reach them, but a fundamental shift in how we attain and use the power to influence actions.

In the old model we could leverage specific resources under our control—such as brand equity and large TV budgets—to get people to do what we want. Firms with large budgets could deploy bigger ad campaigns, muscle competitors out of shelf space and run predatory price promotions when things got hairy. The bigger you got, the more you leverage you had.

Yet today control is an illusion. Even the smallest startup has access to resources—such as powerful software through the cloud, robust marketing vehicles like Facebook and Google and limitless shelf space on the Web—that only major corporations had a generation ago. Today, power has become distributed, rather than centralized.

So we need a new mental model. Rather than clawing our way to the top of the heap, we need to nudge our way to the centre of the network. To do that, we need to use platforms to access ecosystems in order to create movements. Pepsi Refresh failed not because it was pulling, but because it was pulling from the periphery rather than from the centre.

Today, we live in a networked world, where the success of our strategy is determined by how we manage connections. And it’s not only connections between consumers and brands that we have to take into account. As we deepen our bonds to consumers, they also increase engagement with each other and recruit others into the fold.

It is this combination of small groups, loose connections and shared context that gives rise to the movements. When relatively small actors synchronize their actions through networks, they can muster resources far greater than any organization, enterprise or government. That’s how disruption happens.

Some brands, like Uber, build platforms of their own to access ecosystems of consumers. Others, such as Zynga, and app developers, use platforms that others have built, like Facebook or Apple’s App Store. Still others, like Buzzfeed, build platforms that integrate with other platforms. Yet all of them compete through centrality rather than brute force.

So we can no longer think in terms of rifles vs. shotguns or push vs. pull. It’s not nodes that we need to target, but the networks. We can no longer coerce customers to do what we want, but must inspire them to want what we want.

Why Marketing Has Changed… Forever

Clarifying the Path to Purchase