How Do You Get People to Pay for Content?

Clearly this is a tough time for many media companies, particularly newspapers. For decades, they not only played a primary role in informing the public, they were astoundingly profitable businesses.

Those days have certainly passed. Rather than having a near monopoly on local news and a strong position in national and international reporting, newspapers are struggling. Even the iconic New York Times is having problems and the Washington Post was recently sold.

Today, rather than paying for a daily newspaper, most people get their news for free online and many incumbent media businesses have begun erecting paywalls for their content. Yet, as I’ve said before, paywalls aren’t generally a smart way to go. Successfully implementing a paid platform requires a smart business model, not a moral crusade.

There is a persistent myth that publishers somehow got conned into giving their content away for free at the dawn of the commercial Web. Now, as the flawed narrative goes, they are merely trying to correct their earlier mistake. Having somehow let the genie out of the bottle, they are desperately trying to put it back in.

This is laughable to anyone who truly understands the economics of publishing. The truth is that newspapers always struggled to break even on print and distribution. Magazines, for their part, regularly subsidize print and distribution by up to 95%. That’s right, for every dollar of revenue they earn from copy sales, they lose as much as $0.95. 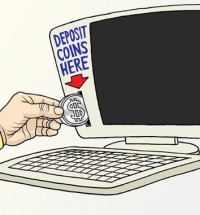 The reason they were always willing to do so is that print advertising has historically been enormously profitable (although inversely related to the strength of the TV market). In the US, where TV markets are highly fragmented geographically, a national magazine that could deliver 2% or 3% of a specific audience was very valuable indeed.

So publishers acted rationally. They were more than willing to forego distribution revenues in order to increase the size of their audiences and earn a windfall in advertising dollars. Now that the Web has made print and distribution essentially free, it makes sense that there is no shortage of publishers willing to “give their product away.”

In truth, for many publishers “free” is a step up.

Carving Out A Niche

Just because most publishers didn’t make money on print and distribution, doesn’t mean that nobody ever did nor does it mean that it is impossible to do so today. Those that can are exceptions, but they are instructive nonetheless.

One way of getting consumers to pay for content is to find a profitable niche. Trade and scientific journals are a prime example. If you appeal to a small, devoted following—especially if their interest is professional—you can usually get people to pay for access. In fact, because small audiences don’t attract much in the way of advertising, a paid model is often essential.

On a larger scale, financial news outlets, such as The Financial Times and The Wall Street Journal, have been able to make money on distribution, especially because many subscriptions are bought by corporations rather than individuals. Perhaps not surprisingly, both have instituted profitable paywalls.

Yet niche products have a serious drawback—they deliver niche audiences and, outside of elite financial brands, that means far less advertising dollars. So if large news brands expect to rely on a paywall for revenues, they are going to be outbid for top journalistic talent. The New York Times has already seen an exodus.

Another way to convince consumers to pay for your product is to develop a product that is truly unique. That’s very difficult for a news business, because after all, nobody controls the news. Great investigative pieces, like David Kirkpatrick’s amazing Benghazi story, are the exception, but are generally money losers (I’ll address this point below).

HBO developed a great paid model by delivering content that nobody else had. It started out with exclusive access to sports events, especially boxing, but they eventually came up with some truly great entertainment programming, like The Sopranos, Sex And The City and more recently, Game of Thrones, which would entice people to pay.

Yet look a little closer and, with the exception of The Sopranos, this is really a niche strategy. Most HBO original programming is edgy content that appeals to only a small segment of their audience. Yet by appealing enough to separate niches, they are able to deliver a complete model. If you like one show enough, you’ll be willing to pay for the whole bundle.

So if it’s worth $12 a month to you to be able to see Game of Thrones or Boardwalk Empire, it really doesn’t matter if you don’t like Girls or Veep. As far as you’re concerned, the rest is basically free anyway.

In a similar vein, political columnist Andrew Sullivan convinced enough of his fans to pay him $1.99 per month to bring in almost a million dollars last year. That’s great for Andrew Sullivan, who built his brand on “free” media, but not really much of a business for a corporation.

When Michael Bloomberg was fired from Salomon Brothers, he realized that traders had a unique need for business information. Although they could get similar data elsewhere, getting it a minute or two earlier could be extremely valuable, especially if the information was packaged with analytical software. He made billions.

People will pay for convenience, especially if time is an issue. I’ve seen some successful models that focus on a particular life stage, such as pregnancy, and offer subscriptions to receive regular updates that cover that particular period. I would assume there is a similar opportunity for travel, but haven’t seen anyone capitalize on it.

A related idea is e-books. News junkies will sometimes pay a few dollars for a truly in-depth election guide or summary of an issue they care about. The appeal can be augmented by including multimedia assets, such as interactive graphics and video. Newspapers have the resources to do this, but hardly ever do.

The Greatest Threat To A Free Press

After living for fifteen years in post-communist countries, nobody is more aware than I am about how important a free press is to a vibrant, civil society. Yet the freedom of the press is being threatened now not by government intrusion, but by publishers who run their business poorly.

David Kirkpatrick’s Benghazi story in The New York Times is a prime example. Involving months of research, much of it in a war zone, a report like that is amazingly expensive—surely amounting to somewhere deep into six figures. Yet despite the world class reporting and months of investment, it seems that almost no thought went into financing it.

There was heavy TV coverage, but no video partnership. Although almost surely Mr. Kirkpatrick will get a lucrative publishing deal, there is no e-book accompanying the story. In fact, there seemed to be no serious effort to monetize the project in any way. No wonder the company is having trouble financially.

The golden rule of media is this: Marketers will pay more for consumers than consumers will pay for content. If you expect to earn money directly from the consumer for content, you will have to innovate your business model and get creative about how you deliver it.