How To Innovate Your Media Business Model

My first media job was in New York, where I learned the radio business. My company, Katz Media, had an outstanding training program, where for three months we were drilled in the basics of radio formats, research techniques, sales skills and marketing strategy.

So when I first arrived in Poland in 1997, I felt well prepared. Surely, in a newly capitalist economy, where the entire concept of a media business was novel, my experience and expertise would give me a leg up. Alas, I found that often the opposite was true.

You see, I had not only changed geographies, but business environments, with important structural, cultural and economic differences. I found that what I had learned as eternal truths in New York were often, in fact, principles derived from circumstance, not necessity. Today, every media business is facing a similar dilemma and everyone needs to adapt.

A Tale Of Two Models

It used to be that the business of publishing content was dominated by two models: free and paid. TV and radio broadcasting, historically, were fully ad supported, while movies relied almost 100% on box office receipts, with some residual revenue on the back end. Newspapers and magazines were hybrids, earning money from copy sales and ads. 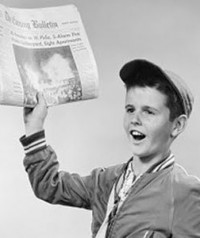 Yet the “free vs paid’ dichotomy is misleading, because neither represent a full model. To truly innovate your business model, you need to look at the full range of how you create, deliver and capture value. What makes media today so exciting and so full of opportunity is that the options are exploding in each area.

It used to be that publishing was focused on owning and controlling content. Print publications would maintain a large staff and license a certain amount of output from contributors. Broadcasters would produce or procure programming and so on. Rights were almost always exclusive, at least during a specified time period.

So it’s important that many of the new media juggernauts, such as Huffington Post, Bleacher Report and RealClearPolitics emphasize curation. By collecting and linking to content they feel is interesting, they’ve been able to build successful businesses. All have been acquired, in whole or in part, by major media outlets for major money.

Others, such as Forbes and Business Insider, have been able to create value by building large networks of contributors (disclosure: I work with both), many of whom are not professional journalists, but subject matter experts in a particular area. Amazon Video has taken a slightly different tack, developing new programing through crowdsourcing.

Still another way to create value is through satellite brands, where a major media outlet syndicates its own content to a vertical brand it owns. Ted Turner pioneered this strategy with thematic cable channels in the 80’s and others, such as The Wall Street Journal, have used a similar approach with verticals like All Things Digital.

For a long time, business strategists argued that to attain competitive advantage, you need to dominate the value chain. So, not surprisingly, the wisdom of marrying content with distribution was taken as gospel in media circles. TV networks built studios; newspapers delivery infrastructure and magazines sophisticated databases of subscribers.

But of course, distribution was the first thing that the Web blew apart, starting with the walled garden model of AOL. Rather than having to go through proprietary distribution, whether that be a delivery truck or a technology platform, consumers can now access the content they want through a web browser and everybody is on a fairly level playing field.

While many legacy media companies complain about this, it’s generally a good thing for everybody. Consumers, of course, get more choice, but content producers benefit as well. The truth is that distribution was generally a loss leader and companies invested in it mostly to get better ad rates. It was rarely a stand-alone profit center.

Nevertheless, there are ample ways to innovate distribution. Firstly, zero cost distribution has opened up a wealth of opportunities for content producers, such as the burgeoning video ecosystem that’s building up around the web. Some, such as Politico, have repackaged reporting as e-books and others have profited from events and conferences.

Incumbent businesses have generally been very protective of their traditional revenue streams. The movie studios waged a legal battle against video recorders for over a decade, before they realized that video sales were a goldmine. The music industry thought the Internet would kill its business, but now is minting digital money.

The truth is that for all of the talk about “trading analogue dollars for digital pennies,” the reality is just the opposite. Never before have so many media brands become so valuable so fast. Even AOL and Yahoo—often thought of as has-beens in the digital game—have multi-billion dollar valuations.

And the reason is that there has never been so many ways to make money. In addition to advertising and subscription revenues, affiliate programs such as Amazon Associates make it possible for web sites to earn as much as 10% on e-commerce sales. Other opportunities, such as sponsored content and native advertising, also show promise.

For many media companies, the biggest opportunity is web video, which is expected to grow almost 40% in 2014. After years of salivating over TV money, now anybody can compete for those budgets. The truth is that most legacy publishers really haven’t made much of an effort.

The Future Does Not Fit In The Containers Of The Past

Today, every media business is experiencing something similar to what I did when I moved to Eastern Europe in the late 90’s, except they didn’t need to change geographies to change environments. The world shifted beneath their feet.  It’s possible that I had it easier, with obvious linguistic and cultural challenges to overcome, I knew I had to adapt.

And in time, I did.  It wasn’t easy, but I learned the new rules and, as I went to do business in other countries—I lived and worked in four separate markets during my fifteen years overseas—I found that every place worked differently. I eventually realized that there are, in fact, limitless ways to make money in the media business.

So the key to competing in the age of digital is realizing that your business model will not last. How you used to create, deliver and capture value is irrelevant. If it doesn’t make you money now, it’s just baggage. As Vivaki’s Rishad Tobaccowala puts it, the future does not fit in the containers of the past.

Once you accept that, all that’s left is opportunity.