Is Your Platform Burning?

In 1892, George Eastman formed the Eastman Kodak Company to “make the camera as convenient as a pencil.” The idea took off and by the early 20th century, Kodak had become one of America’s largest companies and Eastman one of its most successful entrepreneurs.

What made Kodak so successful was not just its products, but the ecosystem that it developed around them. From chemicals to specialized paper to specifically designed processes, the firm became a centralized platform for connecting people to the resources they needed to capture moments on film.

Unfortunately, a new technology came along—digital photography—that transformed Kodak’s model into a burning platform. Despite pioneering the technology, the company was unable to move to a more decentralized model, found itself marginalized and ultimately bankrupt. If you want to avoid the same fate, here are three things you’ll want to look out for.

1. A Significant Improvement in Efficiency And Convenience 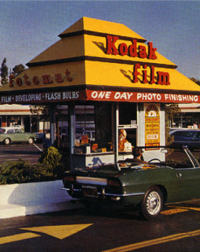 In 1975, a young engineer at Kodak named Steve Sasson invented the digital camera. At first, it wasn’t much to look at, weighing eight pounds and able to produce pictures of only 0.01 megapixels (today’s iPhones produce 8 megapixels images, an 80,000% increase). He estimated at the time that it would take 15 to 20 years for the technology to become viable.

By the mid 90’s, digital cameras could take pictures that were somewhat comparable to a consumer camera, but they were very expensive and not particularly convenient. These were still the days when we deleted e-mails with attachments to save memory space, so storing photos on a computer wasn’t a great option for most people.

However, what Kodak missed was the pace of improvement—and not just in digital photography.  Internet speeds and storage performance were moving exponentially fast too and, before long, people were not only preferring to keep photos on their computer, but to share them on sites like Flickr.

That’s the magic of accelerating returns. At some point, a difference in scale becomes a difference in kind. While digital photography was clunky in the 90’s, it took just a few more technology cycles to become convenient enough to change behaviors.

2. A Major Shift In Switching Costs

We have lots of clunky, inefficient things in our lives. The QWERTY keyboard was originally designed for mechanical typewriters, but few take the effort to switch to the Dvorak keyboard, which is more efficient and available on most operating systems. Hours and seconds are an archaic way to measure time. A decimal system would surely be more logical.

Yet, as Tim Kastelle points out, switching costs can delay adoption of useful innovations. For people used to typing on a QWERTY keyboard, the incremental benefit of a new system just doesn’t seem worth the effort. Nor would the modest reduction in complexity of a new time system be worth the confusion transitioning from hours and seconds would entail.

In the 1990’s, Kodak could take solace in the fact that the costs of switching to digital photography were high. Kodak’s ecosystem of convenient processing centres made dropping off photos incredibly easy, even fun. At the same time, digital cameras were expensive, editing software was difficult to use and the pictures were not all that great.

Yet they were living in a fool’s paradise. As technology improved and switching costs dropped, Kodak’s position became increasingly untenable. All of the sudden, the drive to the one hour photo shop seemed like a nuisance and the idea of having to pay for pictures you didn’t want developed felt like a rip off.

Once it became easier to choose the shots you wanted at home and email them to friends, Kodak’s business model was toast.

And, to be fair, some real progress was made. By 2005, the company was the ranked first in digital camera sales. Still, the ground that the Kodak gained could not replace the steep falloff in its film developing business and CEO Antonio Perez launched a new strategy aimed to put his firm back at the centre of the photography ecosystem with a slew of digital services.

Alas, it was not to be. As it turned out, the killer application for digital photography was not hardware or software, but social relationships and the space was transformed around services like Facebook and Instagram. Once again, Kodak found itself not at the centre, but the periphery and its platform was burning once again.

In the end, Kodak’s fate was sealed not by its failure to recognize the problem, or even to innovate, but to connect to emerging platforms in any meaningful way.

In the industrial age, we needed bureaucracies to manage resources. They were slow, deliberate and resistant to change, but they were incredibly efficient at moving around men and materiel. They weren’t designed to foster creativity, but to perform rote tasks on a massive scale.

Yet the digital age is different. We now have intelligent machines that can perform routine jobs far. So rather than merely pursuing efficiency, we need to use platforms to access ecosystems in order to create new value. That’s a fundamentally different job and it requires a shift in mental models.

When confronted with the problem of digital photography, the company sought to leverage the ecosystems managed by its internal bureaucracy (or, in business school parlance, exploit its core capabilities) by focusing on cameras and digital printers, but failed to recognize that new platforms were emerging that were enabling new behaviors and new types of customers.

In a networked world, success is not just determined by how we plan and execute, but how we widen. When your platform is burning, it makes no sense to try to rebuild it in a new form, you have to connect to new platforms that will help you harness the creativity of new ecosystems and allow you to re-imagine how your business works.