The One Thing That Can Transform an Idea into a Phenomenon

Do you enjoy picking groceries up in your electric car? When you get to the store, do you prefer to pay with bitcoins? Do you have solar panels on your house? If the answer is “yes” to any of these questions, you’re in the distinct minority. So much so, that a lot of people probably think you’re weird.

Why is it that the “next big thing” only really gets big once it has become boring? Computers were exciting when they were used to put a man on the moon, but when we put much more powerful devices in our pocket and use them to send tweets and play games, they become mundane. 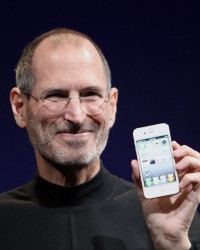 In their new book, Bold, Peter Diamandis and Steven Kotler posit a theory: Technology is only able to gain traction  when it acquires a “simple and elegant interface,” because that’s what “plucks a technology from the hands of geeks and deposits it with the entrepreneurs.” So if you want to know what will take off, don’t look at the technology. Look at the interface.

It takes awhile for new technologies to take hold. Edison introduced his light bulb in 1879, but we only began seeing productivity gains from electricity in the 1920’s—more than 40 years later! Computers first appeared in the 50’s, but we didn’t use them much until the 80’s. The Internet was invented in the 1960’s, but didn’t take off until the 90’s. You get the idea.

The truth is that when a breakthrough technology first appears, we don’t have the foggiest idea what to do with it. When electricity was first introduced into factories, it had little impact because managers continued to arrange plants around the power source, as if there was still a steam turbine in the centre. Productivity barely budged.

Yet when a new crop of managers realized that electric power allowed them to design factories around workflow, productivity soared. It’s a similar story with computers. They really began to take off when the graphical user interface was deployed widely in the 80’s. And who can imagine surfing the Internet without a browser, developed in the early 90’s?

The simple truth is that technology only becomes useful when people can use it easily. Before that happens, it’s really just a lab project.

The Diffusion Of Ideas And Crossing The Chasm

Economists like to build rational models around human behaviour. If something is valuable, people will want it and demand will build. As supplies become tight, prices will rise, creating incentives for more suppliers to enter the market, driving down prices and stimulating more demand. That, in a nutshell, is the economic theory of how markets grow.

Yet in the early 1960’s, a young sociologist named Everett Rogers noticed that demand for new technological innovations didn’t work the same way. If fact, he found that when an exciting new product was first introduced, most people didn’t want it and demand would be limited to a small core of innovators who were willing to experiment.

Though once the idea took hold in a core group, it tended to spread to a new group of early adopters that was slightly less reticent. As the innovation began to gain popularity among early adopters, it would start gaining traction among more mainstream folks and then, before you knew it, everyone else would join in.

In effect, instead of the economist’s smooth demand curves, Rogers saw a series of thresholds. That was a big shift in and of itself, but author Geoffrey Moore took it even a step further:

In his book, Crossing the Chasm, Moore pointed out that the groups that Rogers identified value different things. While innovators and early adopters are willing to put forth great effort to use new technology, those that come after want an easy transition. In other words, they will only adopt the new technology when an effective user interface comes along.

We like to think that disruption happens in Silicon Valley and other technological hot spots, but the reality is that things only take off when they gain traction somewhere else. The true face of revolution looks a lot more like The Good Wife than it does Homeland. Innovation doesn’t become real when you read it in Wired, but when you see it on CNN.

Sure, it is the core group of early adopters that get new innovations going. However, unless the technology is able to make inroads outside that elite few, it will remain a niche product. It is only when early adopters are able to find a way to connect to mainstream users that a movement takes hold. That, in effect, is how disruption happens.

Ironically, it is often the early adopters, usually hobbyists who have built a tight knit community around the new technology, who are most resistant to spreading it. They feel that when an innovation goes mainstream—like when AOL popularized Internet access and created the“Eternal September”—it becomes corrupted.

And that’s why we call people like Steve Jobs geniuses. They are the ones who are able to see that the grimy bunch that collected around the Homebrew Computer Club could one day morph into a throbbing mass of soccer parents shopping for sleek laptops. It’s the interface, not the mechanics,  that makes an idea “insanely great.”

Once you realize the power of the interface, the future is much easier to predict. As William Gibson said, the future is already here, it’s just not distributed yet. Electric cars have been around for decades, but Tesla showed how they could be made fun, easy and elegant. Now big automakers like BMW and GM are pushing into the space as are major utility companies.

Today, cryptographic currencies like Bitcoin are curiosities, but soon they will be integrated into the financial system and all we’ll notice is that transactions will be cheaper and more functional. Quantum computers like D-Wave are now confined to the lab, but before long, we’ll all be accessing them with our smartphones through the cloud.

What we’re seeing, in effect, is a radical shift in value toward design. As the world of bits invades the world of atoms, the product interface is becoming decisive. We’re less confined by possibility and more limited by usability. We hear every day about new technological wonders, but who has time to figure them all out?