Baby Boomers Are Opening Their Wallets - So Says Gallup

You should read this research from Gallup.

As the title suggests, it reckons that US Baby Boomers are spending - certainly more than they did a year ago.

Gallup's analysis suggests that there are substantial differences in the fiscal experiences of different segments of baby boomers. That really is not a shock.

So should you be focusing on the leading or trailing edge boomers aged 59 to 68 and 50 to 58 accordingly. 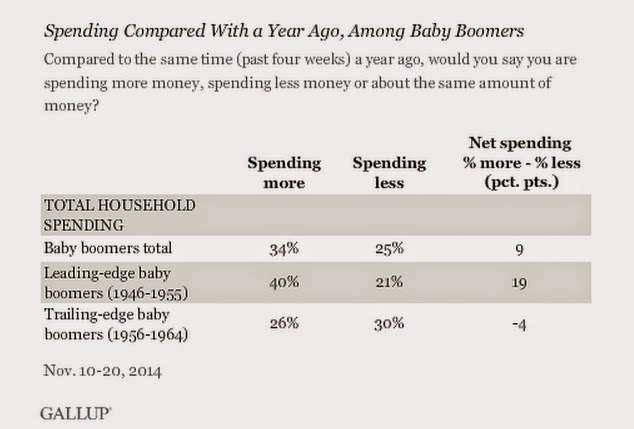 Again, not a shock but the results show the older group are opening their wallets the most.
No longer burdened with some significant financial responsibilities, such as college tuition, mortgages, children's expenses and investments, unlike trailing-edge boomers.

As Gallup says: "the takeaway for marketers here is pretty clear, and it should come as welcome news to many: Leading-edge boomers appear to have greater latitude in their spending -- and are applying it to things they would prefer to do rather than things they have to do. For companies hoping to market to baby boomers, now is the time to begin to think of these two very different cohorts as distinct groups, with very different needs and responsibilities, and market to them accordingly. Older boomers, free of family financial obligations and focusing on new possibilities, will likely respond in ways that younger boomers won't -- or simply can't for now."