When Henry Ford started his company in 1903, he did more than just create a car or an assembly line (neither of which he actually invented). What he did was establish an entirely new form of organization, culminating in the vertically integrated River Rouge complex that was completed in 1928.

By mid century, nearly every facet of life was transformed. We moved out to the suburbs, built gas stations and shopping malls, massed produced and mass marketed. Enormous enterprises arose that built large bureaucracies to control it all and make it run efficiently.

Yet today’s digital economy is fundamentally different. Rather than assets managed by centralized organizations, we have ecosystems managed by platforms. Capabilities are no longer determined by what you own or control, but what you can access. Therefore, we need to think less about how we build efficiencies and more about how we build connections.

How Al Gore Created The Internet

By now, the creation of ARPANET is a story that’s been told many times. Brilliant innovators, like Paul Baran, Vint Cerf and Bob Kahn, created new technologies, like packet switching and TCP/IP, to piece together a computer network that linked great educational and scientific institutions. The result was an open marketplace of ideas among academics.

However, ARPANET was not the Internet. It was a relatively closed network that was only accessible to an intellectual priesthood. Very few people even knew it existed, much less derived any use from it. It was, in effect, a revolutionary technology waiting for a revolution.

The Internet, although this has now become a punchline, was largely the brainchild of Al Gore. His father had been involved with creating the interstate highway system and he believed that the computer networks under government control could be used to create an “Information Superhighway.” The Gore Act of 1991 and other legislation made that happen.

It was, in retrospect, an unlikely vision. The idea that the obscure networks that scientists used to communicate with their peers in other institutions should, or even could, be made available to the general public was far from an obvious conclusion. That it would unleash such a torrent of innovation and economic activity is nothing short of miraculous.

Clearly, what made the difference was not the technology, which by the 90’s had existed for decades, but access.

As Gore was wrestling with the government bureaucracy to open up nascent computer networks, Tim Berners-Lee was struggling with a problem of his own. In his case, it wasn’t so much an issue with long distance communication, but that the scientists in adjacent labs couldn’t share ideas effectively.

At the time, Berners-Lee was a systems administrator at CERN, the European physics lab that recently discovered the Higgs boson. He noticed that although loads of groundbreaking research was done at CERN, much of it was effectively buried in an avalanche of platforms and protocols, none of which seemed to be able to talk to one another.

His solution was the World Wide Web, which made it possible to format a document so that it could be viewed on any computer, creating a universal platform. What’s more, he made it easy to link information, so that scientists at CERN could not only reference each other’s work, but allow readers to access it from within their own publications.

Before long, Berners-Lee’s creation was embraced by the Internet community as a whole and was expanded to included photos and dynamic capabilities, so the same page could be constantly updated with new information. That’s what made the Web a great place for news, weather and online stores.

In 1994, Berners-Lee founded the World Wide Web Consortium (W3C) to govern the development of his creation. Through his effective leadership, the Web became a global phenomenon, spurring an amazing amount of innovation, startup companies and venture financing.

Yet he still felt that the Web fell short. Sure, it revolutionized how people communicated with each other and established a universal marketplace for ideas, but it was still hard for machines to talk to one another. Proprietary systems held an enormous amount of information in their databases, but once again, it was trapped in a vast array of protocols.

For example, if you were looking for a car on the Web, you could go to different auto sites and see what they had to offer, but if you tried to combine them into one universal database, you would quickly run into problems. Some would have designated Toyota and Ford as “manufacturers,” others as “brands” and still others as “makes,” making aggregation difficult.

So Berners-Lee saw the need for a new semantic web, which would unify and link data in much the same way that the World Wide Web unified and linked documents. Today, more than a decade later, the idea is unleashing a new torrent of innovation and unlocking value that rivals the Web itself.

The Rise Of Ecosystems

Back in Henry Ford’s day, every product was an island. You could buy a car from Ford, or one of his competitors, and it would mostly operate as advertised. However, if you wanted to combine a Ford with a Chevy or any other producer, you’d have trouble. In fact, that’s the way companies liked it. They wanted to lock the customer in.

Yet consider what happened in 2008. Faced with the bankruptcy of its chief rivals, GM and Chrysler, Ford lobbied for a government bailout. Its management realized that their demise would also bring down supplier networks and threaten Ford’s existence as well. What once was a battle to the death became a complex network of interdependencies.

Today, the marketplace is dominated by ecosystems. Apple’s App store, for example, not only brings the company billions in revenues, it also allows it to tap the capabilities of thousands of developers to enhance its products. To compete, Microsoft not only needs to build competitive phones and tablets, it also needs to attract a similar network of developers.

Apple is not alone. Marketo has built a platform for marketing software, as has Xero for accounting, Tidemark for ERP software, Kareo for medical applications and IBM for artificial intelligence. The list goes on. A competitive product is no longer enough, you also need pervasive platform. 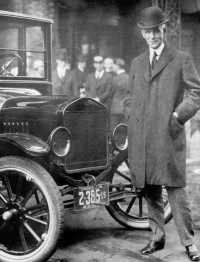 Clearly, times have changed since the days of Henry Ford and strategy needs to adapt. Whereas in earlier times, firms competed on the basis of efficiency, capabilities and performance, now managers must think in terms of widening and deepening connections.

Consider Elon Musk’s decision to open up its patents for electric cars, or Toyota’s more recent decision to do the same for hydrogen cars. Or for that matter, IBM’s $1 billion investment to contribute to the open source Linux community. Open and accessible has replaced closed and proprietary.

Today, we live in an age of platforms, not products in which firms not only compete on the capabilities of their technology, but the accessibility of their API’s and SDK’s. As the world, this trend will only broaden and spread further.

The last century was driven by mass production and increasing efficiency. This one will be a semantic century, in which how you connect will determine how you perform. The objective is no longer to claw your way to the top of the heap, but to nudge your way to the centre of the network.

Henry Ford must be rolling over in his grave.