"Be Positive" Is Not a Strategy

Have you ever felt like the picture to the left describes your workplace?

When I was in sports in high school, I was told that a positive mental attitude was everything - you can't win without it. I agreed, and I still believe a positive mental attitude has many benefits. You have to agree that moping around, being a Debbie Downer, and thinking you can't do something will certainly set you up for failure. And, quite frankly, that's depressing. It's way more fun to be happy.

OK, so let's think positive for a minute. Or forever. 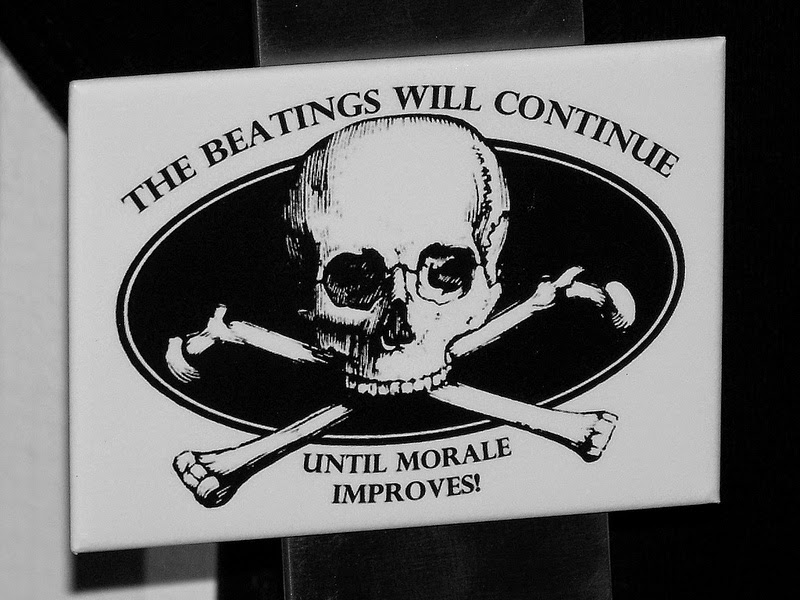 Let's think about your workplace and your culture within. Assume it's a stressful time - the winds of change are swirling about at tornadic speeds. There's little clarity in your role, and no clear vision has been communicated to the company at large. Everyone knows that it's a challenging time for the organization, and yet you're silently pulling for the good guys. You know they can do this.

Then one day, finally, you get a message from company leadership. Yay! It's the clarity you've been waiting for!

You read the message, and it says, "Be positive."

You sit there, perplexed. Your mind begins to swirl with that same tornadic speed as the winds of change. This is going to be our big change strategy? Everyone needs to be positive?

This is a problem because, when everyone is/acts positive, we...

It's all a sham. With hopes that "positive will be the new black." After all, isn't that the goal? Employee happiness? So if you want to be happy, be happy - damnit!

There's a quote from Ralph Marston: Being positive in a negative situation is not naive. It's leadership.

And I get that being negative is easier than being positive. Human nature has us focusing more on the negative, for whatever reason. Misery loves company, I suppose.

I'm reminded of the Titanic: the deck is clean, the rats are gone, and the band is still playing. Can't be all bad, right?

So let me get to my point: "Be positive" is not a directive that facilitates or creates engagement. Being positive is not an employee engagement strategy, a leadership strategy, or a directive to drive culture change. Being positive without considering or acknowledging reality is dangerous. Ignoring reality doesn't make it go away. Positivity without reality can only yield a bad outcome. While it makes for a nicer, friendlier environment to be in - in a fake sort of way - I think it's short-sighted and ignores the obvious - that positive energy does not fix what ails you.

What we have here is a leadership problem.

I'm reminded of this statement - "We have a crisis in leadership in this country" - that Bob Chapman (Chairman and CEO of Barry-Wehmiller) made in his Tedx presentation. Take a look at my post about his talk; he says: "7 out of 8 employees believe they work for a company that doesn't care for them." The reason: leadership and leadership's misguided focus. Looking at the scenario I describe above (tornadic winds), I believe the company doesn't care about its people.

I think positivity is a good thing, has its time and place, and takes a real leader to (know how to) pull it off during hard times, but when employees know that the ship is sinking, telling them to "be positive" either makes them think that you're stupid or that you don't care about them. You pick.

Don't pretend there are no issues. Or don't try to mask the fact that there are issues. Don't avoid the issues when asked about them. All of these are almost worse than having issues.

What can be done?

As you can see, communication is probably the most important tool you have in your toolbox to overcome some of the angst and anxiety that your staff is feeling. (I should add: meaningful communication is key.) Keep the lines of communication open; allow it to flow both ways. Don't hide in the ivory tower. Give employees a reason not to focus on the negative.

Fix what ails you. And communicate while you're fixing it.

Instead of leaving you with a quote today, I thought I'd share this brief Monty Python video. Enjoy.

Image courtesy of Will S.