In Silicon Valley, the PayPal Mafia reigns supreme. So much so that it is hard to think of any successful technology startup in the last ten years—from Facebookand LinkedIn to YouTube and Yelp—that hasn’t been touched by it in some way.

The “don” of the PayPal mafia, Peter Thiel, is one of the most intriguing characters in business today. He was a founder of PayPal, as well of data analysis firm Palantir, and is also a successful investor, creating both Clarium Capital and the Founders Fund.

Yet it is not only Thiel’s success that makes him interesting, but also his contrarian views, such as his libertarian politics and the program that pays kids to drop out of college. Thiel recently published Zero to One, a book based on a startup course he teaches at Stanford, which summarizes his philosophy and gives four rules for creating a great business.

One of Thiel’s core tenets is that capitalism and competition are in conflict, so an entrepreneur’s key goal is create a monopoly. That’s why Thiel says “it’s always a red flag when entrepreneur’s talk about getting 1% of a $100 billion market.” In his mind, any plan that seeks out robust competition is not a very good plan. 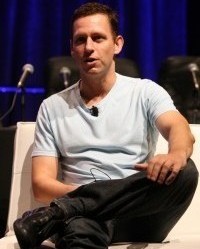 So Thiel regards proprietary technology as essential. Not just any technology mind you, but one that provides a 10x performance improvement over the closest substitute. Even as a startup, Amazon could offer at least ten times more books than a traditional book store, just as it could be argued that PayPal made buying and selling on eBay ten times easier.

While this rule is very difficult, if not impossible, to put into strict practice (Amazon didn’t start out with technology that was particularly unique and it’s hard to define what ”ten times easier” means), it is a good way to think about how your business creates value. If you’re not shooting to produce something significantly better, then what’s the point?

Everybody uses Microsoft Office because it’s the most common software. PayPal is convenient because it is popular, which makes it easy to find places that will accept payments from it. Facebook is useful because you can find your friends there. These are all examples of businesses that benefit from network effects.

What makes a network based business so perfectly suited for a startup is that they are often unattractive to large, established players. As Tim Kastelle points out in a recent post, network effects take time to develop, so at least in the beginning they are unlikely to perform well by conventional metrics. But in time, they can become blockbusters.

That’s why Thiel recommends that entrepreneurs go after small markets in which network effects will take hold faster and points to his experience at PayPal as an example. When the technology was focused on the disperse market of Palm Pilot users, it never got very far. However, it was an early success on eBay, which was a far more dense community.

Academic research backs him up on this point. Studies done by Solomon Asch in the 1950’s showed that people are highly influenced by local majorities and more recent research into network science suggests that network density is far more important that network size.

Thiel, like many others, is a big fan of network effects because of their ability to produce accelerating returns to scale. As the market grows, each customer becomes increasingly valuable, not just for what they buy, but for the value they add to the rest of the network. It is, after all, returns to scale that create outsize profits.

Many people assume that returns to scale are automatic, but they are not. As Ronald Coase showed in his famous 1937 paper, organizational costs can mitigate scale advantages. More recently, it’s become clear that information technology has made scale advantages harder to sustain.

It’s easy to see how a scalable market, combined with network effects, can make for a very disruptive business model. You start with a market that is too small to attract competition and end up with a high margin business that is hard to attack. That’s why every enterprise today needs to be taking advantage of open ecosystems to create value and lower costs.

The last element that Thiel cites is branding, although he goes into far less detail here than the other rules. He uses Apple and Steve Jobs as an example, which is fairly obvious, but doesn’t go much further than that.

Despite the minimal space that he gives to branding, it is an important point—and one that startups often don’t pay enough attention to. As I’ve noted before, intangible value usually accounts for the majority of the value of a successful business. This is even true for resource-based firms like Exxon (66% intangible value) and retail giants like Wal-Mart (70%).

We go to Wal-Mart because it promises and delivers a low price. We value Apple because we know that every product they make will be “insanely great.” Google can attract the smartest people because it delivers on the promise of being a rewarding place to work. Exxon gets access to opportunities that others don’t because it has a history of performance.

A brand is essentially a promise. We value brands that we trust and that applies not only to consumers, but also to suppliers, employees and other partners.

The Perils Of Mixing Philosophy With Business

One final point about Thiel’s book is that it is, strangely enough, very much a work of Marxist philosophy. He not only quotes directly from Marx throughout, but his core argument about capitalism and competition being in conflict can also be found at the core of Marx’s ideology.

While Marx saw economic rents in oppressive terms, leading directly to class war, Silicon Valley’s libertarians see it as wholly positive—a creative force that renders notions of fairness quite beside the point. As paradoxical as it may seem, Libertarians and Marxists are mirror images of each other, sharing ideologies but coming to opposite conclusions.

This is worth mentioning because Marxism is a failed ideology, whatever guise it comes in and, while Thiel is a fantastic businessman and a very smart guy, he is not a prophet. Many of his arguments torture logic—such as his treatment of the Rawlsian bargain—and he has a history of reversing positions. Some of his ideas are truly loopy.

So as a work of philosophy, One to Zero falls far short. However, as a business book it is up there with the best of them.