How We Should Prepare Our Kids for the Future

Education has long played an important role in the success of the United States. From some of the world’s first public schools to the land grant universities which spurred innovation in agriculture, our development as long been tied to how we educate future generations.

So we should be concerned that US students performance on the international PISA tests, which evaluate not just knowledge but cognitive ability, have not been great. On the most recent one, we ranked 36th, 28th and 24th in the world in math, science and reading, respectively.

This has, of course, created much debate and some, such as Amanda Ripley in her book The Smartest Kids in the World, have offered suggestions for adapting best practices from the rest of the world. However, we also need to realize that our children will face a much different world than we did and will need to build skills for the future, not the past.

Working In A Team

Academics have always been focused on individual achievement. You apply yourself, do your homework and perform well on exams in order to get into a prestigious university. Then you repeat the process in college and possibly graduate school before moving on to a successful career. That’s been the formula for success: Work, achieve and reap the rewards.

However, one of the realities of our modern age is that collaboration has become much more important. In fact, a study in the prestigious journal Nature showed that an average paper has four times as many authors as a generation ago. Moreover, Scott Page, an economist at the University of Michigan has found that diverse groups perform best. 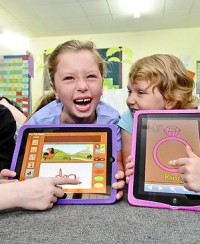 The reality is that today we’re tackling issues that are much more complex than in the past and our children will face ones that are even more multifaceted. They will need to be able to work more closely with others who bring varied skills and perspectives to problems than we ever did.

Interestingly, the Hewlett Foundation’s Deeper Learning initiative, which seeks to help prepare students for future careers, puts a special emphasis on teamwork skills. It’s received heavy support from business organizations like Autodesk and the L.A. Chamber of Commerce, because they recognize how much they need workers who can collaborate.

As MIT’s Sandy Pentland has put it, “We teach people that everything that matters happens between your ears, when in fact it actually happens between people.” So in addition to monitoring your child’s homework and test grades, you might also want to check in on how well they’re working with the other kids.

Of the “three R’s” that we learned in school, arithmetic was generally been the most dreaded. Multiplication tables, long division and deceptively constructed word problems have been the bane of every young student’s existence. In my day, at least, the utility was clear, but now children can rightly ask “why can’t I use the calculator on my phone?

Clearly, in our increasingly data driven age, mathematical skills are more important than ever. Yet they are not the same ones we learned in school. It’s not so important to be able to count and multiply  things—those tasks are largely automated today—but it’s imperative to be able to ascribe meaning from data.

This may seem like a newfangled idea, but in actuality it is a shift to higher level math. As the great mathematician G.H. Hardy put it, “A mathematician, like a painter or a poet, is a maker of patterns. If his patterns are more permanent than theirs, it is because they are made with ideas.”

The Logic of Systems

Every discussion about skills for the future eventually leads to the need to teach computer programming in schools. A wide range of business and political leaders have stressed how crucial it is for today’s students to learn programming languages. Yet, it isn’t the specific protocols that are important, but the logic of code.

Many of the critical thinking and logical skills that are central to the digital world have long been considered abstractions and been relegated almost exclusively to liberal arts departments. Logic courses—usually offered by philosophy departments—are rarely required or even encouraged in high school or college programs.

As I’ve noted before, we now live in the realm of the visceral abstract. There might be debate in some quarters about the validity of Darwin’s theory of natural selection, but its logic is embedded in the logistics systems used by firms like Wal-Mart and UPS. You might not believe in the Big Bang, but the same quantum mechanics also give rise to iPhones.

It is the logic of abstract theories that makes today’s world work. Modern computing first arose not out of engineering, but of problems in advanced logic. So every time you go shopping, receive a package, text a friend or use a GPS system, you are making tangible use of ideas that, at first glance, would seem to have no relevance to the physical world.

The New Era Of Cognitive Collaboration

Whenever my mom has a problem with her computer, she asks me to fix it. I try to tell her that I have no idea what the problem is or how to solve it, but she persists. After some grumbling, I do a few Google searches, find the relevant articles or forums, figure out the problem and get it resolved.

Of course, as I often remind her, my mother could, in theory, do that herself. I don’t have any special knowledge about how to fix computers. I can, however, collaborate effectively with machines that connect me to the knowledge of other people. As natural as that seems to most people my generation, it is a relatively new skill.

An average teenager with a smartphone today has more access to information than even a genius working at a top research facility 50 years ago. The ability to retain knowledge is rapidly being replaced by computers. However, the ability to work with others, understand  patterns and imagine new possibilities remains inherently human.

So while education is more important than ever, we should focus on the skills of the future, not the past.

The main thing that will help

The main thing that will help students and their future is parent involvement. If a parent is constantly engaging in meaningful dialogue as well as investing the time in their educational and social development then they can have the necessary tools to be successful. So many children get the instruction at school but there is no reinforcement at home. Interact with your children and find out what is going on at school and in the classroom.