As part of Hill's Beacon initiative, I traveled to the Y Combinator's Ad Innovation Conference earlier this week to watch some 20 YC-funded start-ups present their technologies to a roomful of ad people. AdExchanger already has a nice write-up that explains what each company does, so that's not what I am going to do here. Instead, I will go through my notes trying to answer the question Paul Graham, the YC co-founder (pictured above with the glass), asked after the event: "So, what stuck?" 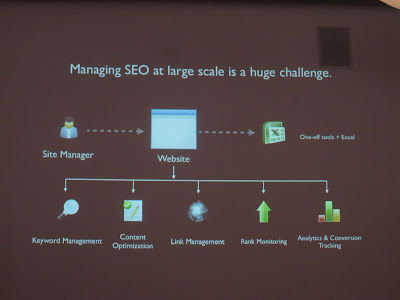 Ginzametrics offers SEO software which they position as a content optimization offering, an angle I liked a lot.  Their slides had a lot of graphs outlining the business opportunity and the advantages of their solution, which made the deck feel like it was designed for investors and not the end users. The site has plenty of screenshots; I would just show those instead. 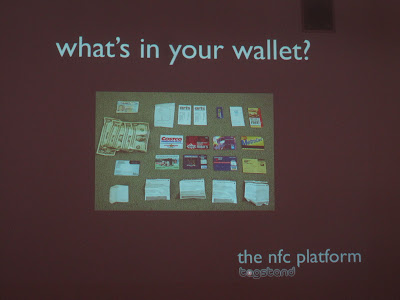 Tagstand develops technologies that have to do with near field communication technologies, the meaning of which they took time to explain,showing how an NFC device (usually a smartphone) can replace just about everything you are now carrying in your wallet. 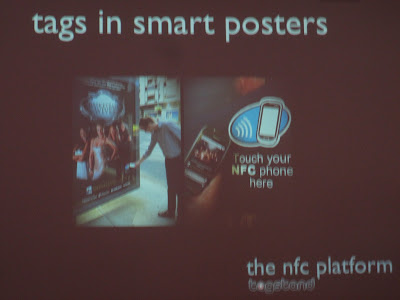 One of possible advertising applications Tagstand suggests for its technology is people downloading stuff off billboards by swiping  their phones near a designated spot. As you'll see a few pictures down, Paperlink shows the same use-case for its own QR code tech. This kind of interaction was also what made people excited about Bluetooth, back in 2005.  It must be working for someone, but I've never seen it myself. Moving information from a billboard into the phone isn't usually the problem; the problem is overcoming people's indifference. 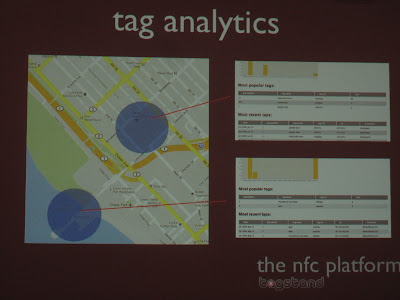 I do like the analytics possibilities Tagstand offers, though. 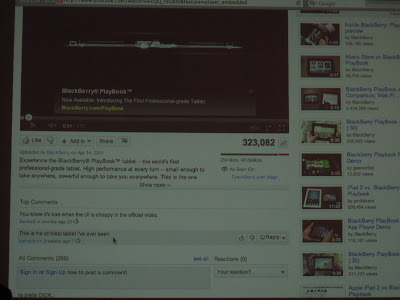 That was funny: Vidyard, a company that offers a "YouTube for business", showed what businesses have to deal with when posting stuff on YouTube -- a promo video for BlackBerry PlayBook followed by a user-submitted top-rated comment about how shitty the PlayBooks are. The company's YouTube reference is understandable but confusing -- in advertisers' minds, YouTube is more about distribution, and Vidyard is in the video hosting business. 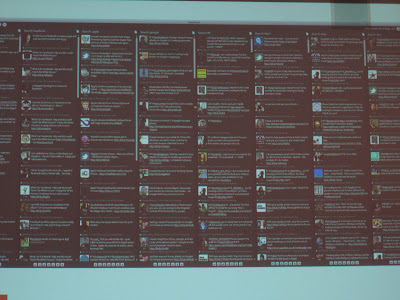 Crowdbooster showed the kind of interfaces that social media managers have to deal with. 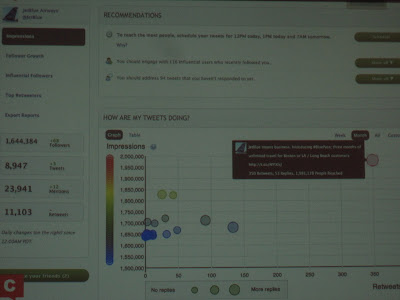 The company offers what they call "the first intelligent social media dashboard".  I would love to see how fully they can replace Radian6 and Tweedeck, the incumbents Crowdbooster contrasts itself against. 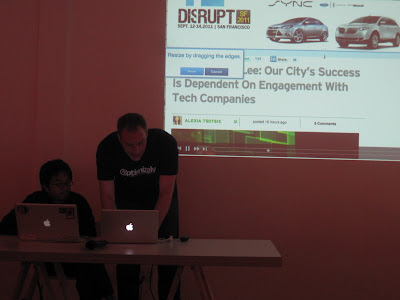 Optimizely was one of the few companies I had known about before the conference -- they help create landing pages for testing. Their technology speaks for itself, and all they had to do was demo it. It's stuff like this that makes you feel like you live in 2011 and not 10 yeas ago. 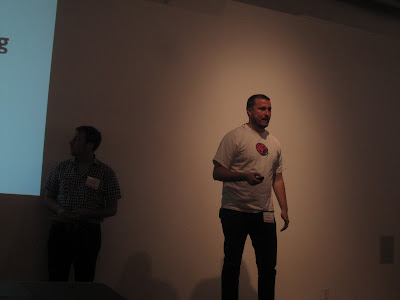 These guys presented off the record. The teams behind each company wore different t-shirts;  the ladybugs stuck. 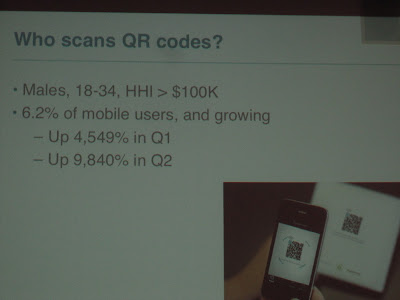 This is a slide from the presentation by Paperlinks, the QR codes guys. I'm not crazy about the data, likely from a third-party study. Up 4,549% in Q1 from what base? How often do you need to scan QR codes in order to be counted? The 18-34 is too much of an age spread for the HHI number to be meaningful here -- is it their income or their parents'? 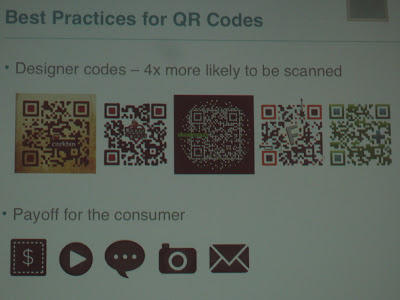 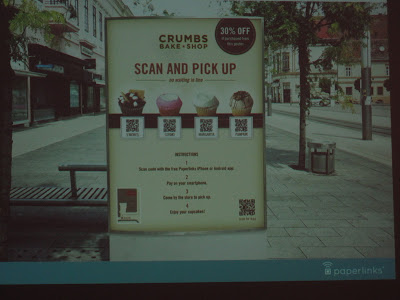 The idea here is that you scan the code for the ice-cream you want and then walk up to the store to pick it up and avoid the line. As I wrote above, it has to be working for someone, although maybe selling ice cream is not the best application -- could Amazon be selling books this way?

But generally, I can't shake off the feeling that  that QR codes are like pagers, a bridge technology that might have been useful for a brief period of time but is already on its way out, being displaced by more advanced things such as full image recognition. To quote Paul Graham, I worry. 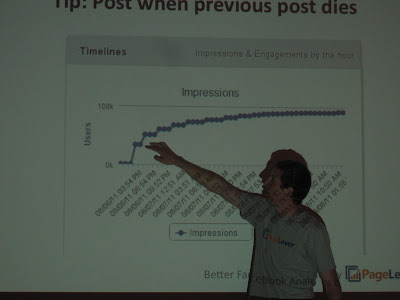 Pagelever offers analytics tools for Facebook fan pages. They shared some of their findings, such as the fact that the best time to update your page is when the previous post is losing traction, which is something they can tell you. 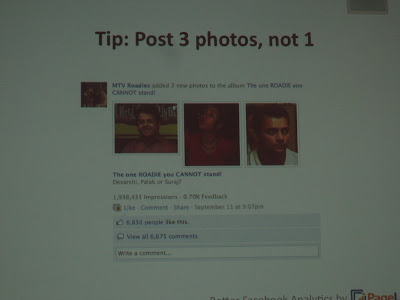 Three photos in one update attract more engagement (likes, shares and comments) than single-photo updates. Attracting engagement is important because that's one of the signals into Facebook's Edge Rank, the algorithm that decides which updates to show to what people. 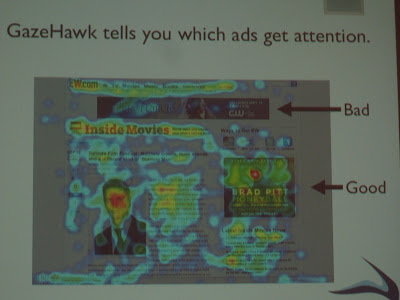 GazeHawk is another company I had known about before the event. They offer remote eye-tracking services using nothing but webcams. I'm looking for an excuse to try them. 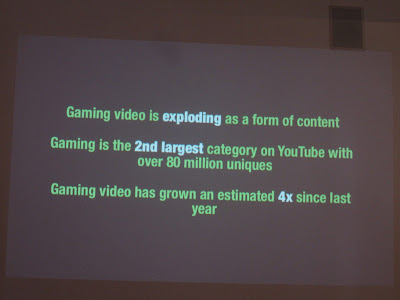 JustinTV talked about how gaming has become a spectator sport. They have recently launched TwitchTV, a streaming portal of gaming footage. 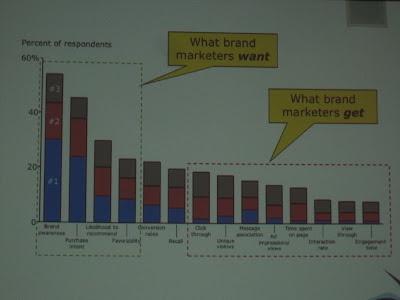 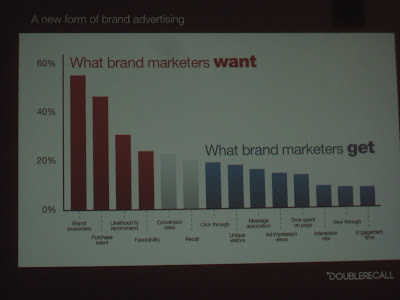 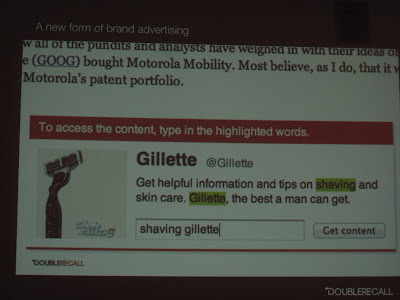 DoubleRecall offers a novel spin on CAPTCHA ads -- it asks users to type in words that are highlighted in a sentence. I thought it was interesting, but I also think CAPTCHA ads in general offer the wrong kind of incentives to publishers.
Original Post: http://adverlab.blogspot.com/2011/09/y-combinator-ad-innovation-conference.html
Ilya Vedrashko, technology, innovation, digital advertising