Mum, Partner, the Kids and Gramps

Put another way – the multi-generational family household (in the US) is back in fashion.

Pew Research Centre’s analysis of U.S. Census Bureau data comes to the conclusions that social trends appear to be reversing. The key findings:

• In 2008, an estimated 49 million Americans, or 16% of the total U.S. population, lived in a family household that contained at least two adult generations or a grandparent and at least one other generation. In 1980, this figure was just 28 million, or 12% of the population

• The growth since 1980 in these multi-generational households is partly the result of demographic and cultural shifts, including the rising share of immigrants in the population and the rising median age of first marriage of all adults.

• At a time of high unemployment and a rising foreclosures, the number of households in which multiple generations of the same family double up under the same roof has spiked significantly. Our report finds that from 2007 to 2008, the number of Americans living in a multi-generational family household grew by 2.6 million. 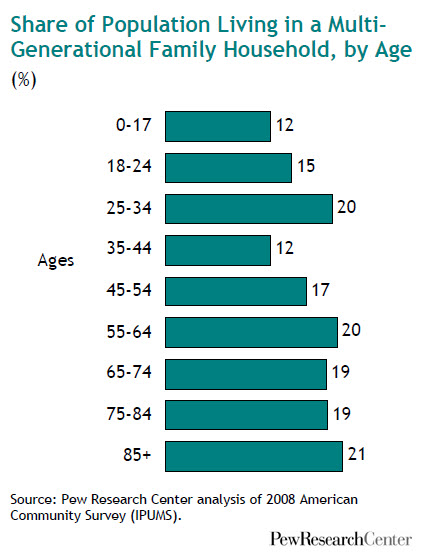 • This trend has affected adults of all ages, especially the elderly and the young. For example, about one in five adults, ages 25 to 34, now live in a multi-generational household. So do one-in-five adults ages 65 and older.

• After rising steeply for nearly a century, the share of adults ages 65 and older who live alone flattened out around 1990 and has since declined a bit. It currently stands at 27%—up from 6% in 1900.

So what does this all mean for marketers when about 20% of the 50-plus are living in a multi-generational household? I am not sure that I know but I am sure it means something, if nothing else that it changes the effectiveness of direct mail.