If you think there's too much talk about augmented reality these days, the good news is that you are not alone, and the bad news is that it's far from over. Gartner has released its latest and retweaked "Hype Cycle for Emerging Technologies, 2009" report, and AR is right there, climbing steadily towards the Peak of Inflated Expectations (definition).  One change from the last year's graph is the estimate of years to mainstream adoption: from "more than 10 years" to "5-10". 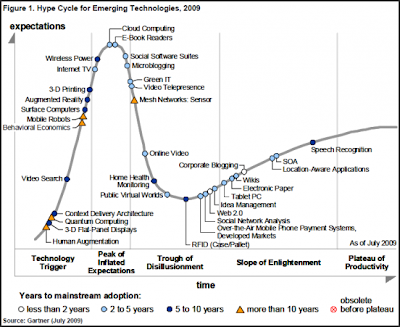 I haven't read the complete report, so I'm making this up, which I shouldn't, but plenty of surprises in this edition: 3D printing doesn't really feel quite so hyped yet to be that far up the slope; ditto mobile robots (?). And what's Behavioral Economics doing there?  If we graph theories, shouldn't the "Free" movement be there as well?

And has Tablet PC already passed the trough of Trough of Disillusionment? (Or there must be a separate graph for Apple's tablet. Does a tech actually need to exist to march through the complete cycle?)  What about electronic paper?

Speaking of 3D flat-panels:  Sky is planning to launch a 3D channel in Britain, just for those 3D-ready TVs.

If you are a fan of the hype cycle approach, there's a recently published book [ref. url] on the subject written by two Gartner analysts; one of them, Mark Raskino, left a comment here last year.