A number of interesting Second Life developments happening all at once: 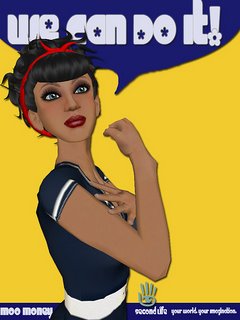 - The subscriber numbers for SL are now over 3,000,000. I think it was 2M a month and a half ago. And around 200,000 this time last year. If you follow the entire numbers controversy that's been smoldering for a long time and has recently erupted on Valleywag, you wonder what these numbers mean.

- Speaking of Valleywag: the blog last week featured an article by a financial consultant (see the full version on his own blog) who argues that because it's so hard to cash out of Second Life with any meaningful amount, the virtual world is nothing but a giant 3-D pyramid scheme. The money quote:

"And thatâ€™s the story of SecondLife. Like the paid promotion infomercials that run on CNBC, sadly SecondLife is a giant magnet for the desperate, uninformed, easily victimized. Its promises of wealth readily ensnare those who can least afford to lose their money or lives to such scam in exactly the same way that real estate investor seminars convince divorcees with low FICO scores to buy houses sight unseen with no money down.

Even some corporations have dedicated marketing budgets to creating a presence in SecondLife. While few will shed a tear for the frivolousness of these companiesâ€™ spending, such adds a false legitimacy to SecondLife. Interestingly, no legitimate, real world corporation has earned net profit from SecondLife activities."

My question from a few posts back is still standing: does anyone know what amount of Linden currency is in circulation?

- In the meantime, Sweden is about to open its embassy in Second Life. Ars Technica writes, "The embassy will be built and run by the Swedish Institute, an entity run by the Swedish Foreign Ministry and who is in charge of promoting tourism to the country. The Second Life embassy will be there to provide information about Swedish culture and history, as well as suggestions for places to visit in the (real-life) country, according to the Swedish Institute's director, Olle WÃ¤stberg." No word on whether the new embassy will have the authority to grant asylum.

- One of the best promos run in Second Life was the one for the Smokin' Aces movie where players were invited to play Assassin in-world. Why? Because it was interactive and engaged lots of people unlike the empty branded edifices. Details at 3pointD.com. I can't believe I missed it last week, and I hope it was really as cool as it sounds.