Gary Carter on Death of TV 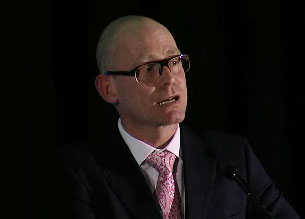 You can find a video clip with a fragment of the speech at AdAge; Gary kindly shared the full text with us. Here's part 1 of 3, with the rest posted over the next two days (Update: see part 2). All emphasis mine.

"My name is Gary Carter, and I work at FremantleMedia, where I have the unlikely titles of President, Creative Networks and Chief Creative Officer, FMX.

FremantleMedia is one of the largest producers and exploiters of entertainment brands worldwide. Our production arm consists of some of the world's most creative companies, and our commercial arm comprises distribution, licensing and home entertainment. We produce television in 22 countries, licence formats to 40 and distribute finished programmes to 150 countries. Apart from the 20 or so long running drama series we produce worldwide, we are probably best known for the IDOLS franchise. FMX, of which I am CCO, is the company's experimental personalised and participatory media division.

If you speak at conferences, you will know that questions, like formats and technologies, come in and out of fashion. At the moment, there are three questions you get asked from the floor. The first of these is: 'So what's the next big thing?' The second is: 'Do you think people will want to watch television on a mobile phone? And the third is, And who will want to pay?

I am not going to answer any of these questions. I'm going straight for the big life or death question.

Is there life after the death of television? And if so, what does that life look like?

In case you haven't realised already, I have to warn you that I have no particular qualifications for doing this. Not from a technological point of view, nor from a commercial point of view, and probably not from any point of view -- but that what's makes me a media executive.

I do have some limited qualifications for speaking from a creative point of view -- first of all, I am creative -- I'm pretty good at flower arranging, for example -- and second of all, I am a Chief Creative Officer.

This experience lead me to wonder if we can build on the 80/20 rule, the one that says that 80% of the work is done by 20% of the people. So I've come up with this, which I like to call The CCO Power Law:

In any meeting in which 50% of the attendees are Chief Creative Officers, 95% of the work will be executed by others.

Everybody is dead -- except iTunes!

And of course -- gameshows! Gameshows are back!

Television is dying, technology is proliferating and content is kind of the network.

And if television is going to die, to quote Joey from FRIENDS, how will we know which way to point our furniture?

But when we talk about 'the death of television', what do we mean? The television industry feels itself under threat from a group of emerging mass media technologies, those which are usually, and awkwardly, described as 'new', or 'digital', despite the fact that they are no longer new, and that everything is digital, even the things -- like radio, or television for that matter -- which weren't digital in the past. And the industry blames these new digital technologies for a whole host of other ills. The steady decline in audiences, the supposed escalation of copyright infringement, declining budgets for programme making.

The response of the television industry to this perceived threat is, in general terms, about as unimaginative as it's possible to be, and it would be depressing if it weren't so banal. I used to say, five years ago, that if I had a cent for every pitch I'd heard beginning 'Twelve people, twelve weeks, one winner, the audience will decide', Iâ€™d be rich. Now, if someone would like to give me a cent every time I heard someone say 'It's a way to bring User Generated Content to television', I'd be even happier, because I'd be richer. Given this kind of response, I sometimes wonder whether audiences are leaving television because it's just not any good.

We can think about whether television is going to die in two ways. First, by looking backwards, at the history of the mass media, and second, by looking forward, and trying to understand some of the impulses behind what is going on, behind media proliferation.

The simple historical fact is that mass communication technologies are never replaced by newer technologies. They co-exist, while continuing to evolve. We still have the newspaper, the telephone, the radio, and the movies, despite the fact that each of these was at the time of introduction viewed as the beginning of the end for the other.

The only mass communication medium in history to have been replaced by another is the telegraph, a service which began in 1851 with the founding of the New York and Mississippi Valley Printing Telegraph Company and spanned 150 years, ending finally on January 27, 2006, when Western Union discontinued the service. Western Union report that telegrams sent had fallen to 20,000 per year, due to competition from other communication technologies, including -- and probably mainly -- email. Arguably, of course, the telegram was not a mass communication technology."