Yes, so we know that Leo Burnett and Bartle Bogle Hegarty -- two ad agencies, for the outsiders -- announced expansion into Second Life.

Leo's future home is marked with a tree, and I just managed to sneak into BBH's new island (it was locked a week ago when I last checked) and take a few snapshots. I have to say that I find it increasingly harder to write these reviews, however brief they are. I'm not an architecture critic (but here's one reviewing SL builds) and there's little yet to talk about besides all these beautiful buildings. In case of Starwood's aloft hotel, showing off the building is the whole point, but sometimes I wish that as much imagination went into the functionality of the place as in its aesthetics. 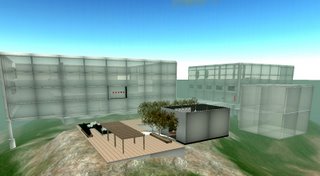 Anyway, BBH's SL office sits on a separate island. On the forefront, you see a small chillout area, a small glass cube of yet to be discovered purpose, and two larger buildings -- the "offices" (right) and an "auditorium". Notably, the structures have no roof, which makes it very convenient to fly in. I've never understood why build public buildings with walls in the first place (at least use "phantoms" so that people wouldn't have to bump into corners looking for the doors), but rooflessness is a good first step. 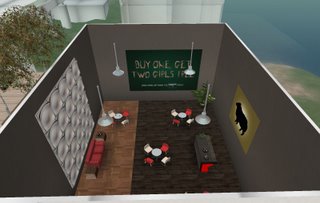 This is the said chillout area. I think it has a video wall that shows off agency's work. 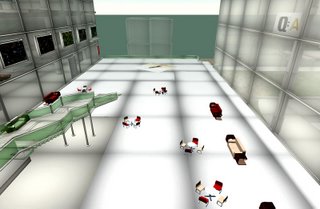 A patio between the two main buildings equipped with tables and benches. Very sunny. If you look hard enough, you'll see my new suit. 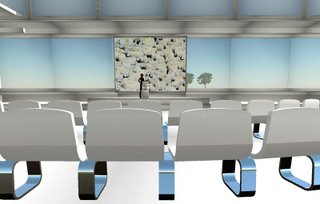 This is their auditorium with a podium and a video wall behind it. An interesting design dilemma: how many chairs do you put in a place like this given that under the current system the server that hosts the island can barely accommodate only about 50 simultaneous connections? Why have chairs at all? 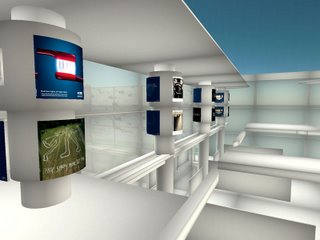 This is the "office" building. The pillars have some of the agency's work on display. 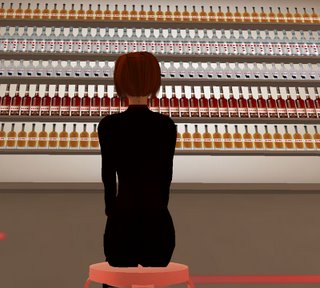 What's an ad agency without a fully stocked bar?