So you've seen the reports in NY Times and elsewhere that YouTube finally figured out (see an earlier post) how to make money on all that traffic it gets. In a nutshell, "YouTube plans to officially announce today [Aug.22] that it is selling space on its main page to run video ads, which viewers will be able to rate and share.

The company is also providing advertisers with "channels," or designated pages where they can display videos and other content."

Here's what we get: 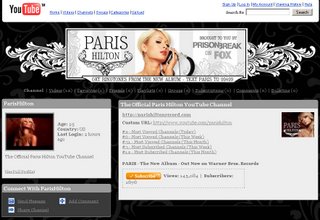 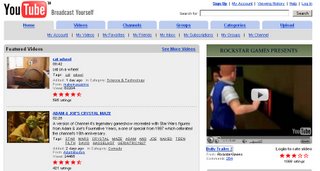 This is a trailer for Rockstar's new game, Bully, featured on the front page of YouTube. The trailer is done in the traditional YouTube video sharing format. Note the three-star rating. Here's Rockstar's profile page. 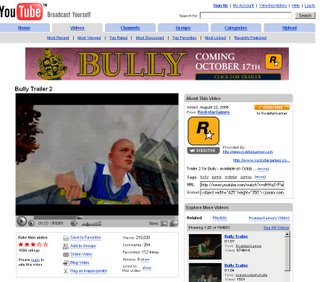 This is the main page for this particular trailer, viewed 215K times since August 22 (not bad). Note the banner on the top. It would be interesting to see how many people have shared the trailer through their own blogs. Wonder if the tepid rating for the trailer will hurt the game as badly as a similarly ranked review would.

Overall, very MySpace-ish. Many what-ifs remain, too. What if your ad is not a video? (Have to see if I can create a video out of a PowerPoint slideshow.) What if there's a campaign to mob your video down?

It could become very interesting if there was a seamless way to integrate pre-edited continuous streams of YouTube content into a DVR box for everything to pop up on a real TV screen.